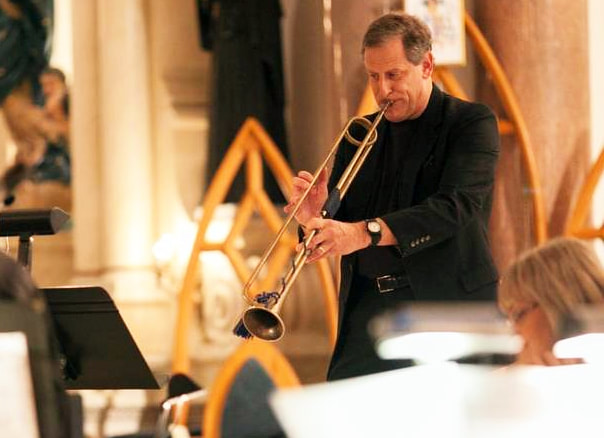 On baroque trumpet, Adam Gordon has performed with many of the major period instrument ensembles in the United States. His early music experiences have included performing with Boston Camerata and Banchetto Musicale in Boston; Philharmonia Baroque Orchestra and American Bach Soloists in San Francisco; the Portland (Oregon) Baroque Orchestra; Ars Lyrica Houston and Houston Bach Society in Texas, and others. In the Dallas-Fort Worth metroplex where he resides, Adam is a member with Texas Camerata.

His numerous performances of the trumpet solo repertoire and chamber music repertoire have been reviewed and includes the following:

The Dallas Morning News said that "Adam Gordon played the valveless trumpet as if nothing could be easier."

The Fort Worth Star-Telegram said that "Gordon contrasted fanfare patterns with smooth stepwise passages and florid turns and trills...and displayed an aural sensitivity that was the highlight of the work."

In a review of Bach Brandenburg Concerto #2 with the Portland Baroque Orchestra, the Oregonian said that "Gordon's playing was brilliant."

Adam presented a baroque trumpet lecture and recital at the 2012 International Trumpet Guild annual conference. Among other things, he spoke about (and performed) chamber music for trumpet and voice of composer Sebastian Duron. He has been a keen advocate for expanding the trumpet repertoire to include the vast amount of baroque trumpet that has, up to now, just been discovered by music scholars in music libraries.
This passion for baroque trumpet is the basis upon which his masterclasses and recitals are based.

​​Adam is Senior Lecturer of Trumpet at the University of North Texas in Denton. Previously, he was Assistant Principal Trumpet of the Fort Worth Symphony, Principal Trumpet of the Sacramento Symphony, Opera San Jose, the Monterey County Symphony, and the Cabrillo Festival Orchestra. Adam has performed with the San Francisco Symphony, Opera, and Ballet orchestras. Overseas, he has performed with the Jerusalem Symphony and the National Orchestra of Mexico. In a review of his performance in Bach's Brandenburg Concerto No. 2, the San Francisco Chronicle wrote: "Adam Gordon was a superb trumpet soloist, producing a crisp golden tone and negotiating the treacherously high lines without the slightest sign of strain."
​